Durban, do you need help with your air conditioning systems?

We offer an number of services as indicated below. We normally service the following brands, but may be able to assist you as per you specific requirements.

We always look to work with trusted brands for peace of mind. Below are the primary air conditioning brands we normally work with. If however, you have another make and model, feel free to contact us and we will try to assist for your specific requirements.

Let us help you find the right product for the job?

There are a number of leading brands within the air conditioning market sector and these products often come with warranties to better guarantee the life of your product investment.

Since we have the necessary expertise and experience working with these top brands, we can offer you much more than just an installation of a new unit. We can offer you a maintenance and repair option on all units sourced and installed by us.

Sourcing the right air conditioner for your requirements is only half the job!

Next you will need a reliable installation company that can install your newly purchased air conditioners correctly and to the manufacture’s specifications. Failure to install equipment correctly, may lead to product or system faults and could even make it very difficult to claim on your factory warranty if the job was not done properly.

Great, so you have managed to get your brand new air conditioners sourced and installed and everything seems to be working perfectly. However, can you say you have peace of mind if anything goes wrong?

Can you confidently say you can call on your installation team to look at any unforeseen issues or have they done a runner now that they have their money?

We can confidently say that we can offer you a maintenance program to service your air conditioning systems to further guarantee the life of your products. And if unforeseen failures do occur, we can assist you with your warranty claims and any other repairs that may be required over the life of your investment.

We strive to always offer competitive pricing for all our services along with quality workmanship, providing you with great value.

If you are unsure as to whether we can assist you with your particular requirements, simply contact us for a hassle FREE inspection and quotation. If we are unable to assist you in person, we will make every effort to steer you in the right direction. 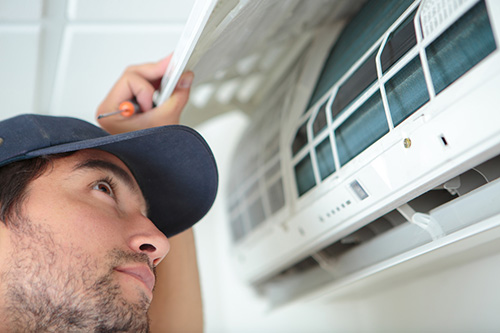 Air conditioning (often referred to as AC, A.C., or A/C) is the process of removing or adding heat from/to a space, thus cooling or heating the space’s average temperature.

Air conditioning can be used in both domestic and commercial environments. This process is most commonly used to achieve a more comfortable interior environment, typically for humans or animals; however, air conditioning is also used to cool/dehumidify rooms filled with heat-producing electronic devices, such as computer servers, power amplifiers, and even to display and store artwork.

Air conditioners often use a fan to distribute the conditioned air to an occupied space such as a building or a car to improve thermal comfort and indoor air quality. Electric refrigerant-based AC units range from small units that can cool a small bedroom, which can be carried by a single adult, to massive units installed on the roof of office towers that can cool an entire building. The cooling is typically achieved through a refrigeration cycle, but sometimes evaporation or free cooling is used. Air conditioning systems can also be made based on desiccants (chemicals which remove moisture from the air) and subterraneous pipes that can distribute the heated refrigerant to the ground for cooling.