There are ~4500 species of cockroaches around the world and less than 1% are considered a pest to human beings. However, cockroaches eat almost anything and although they are considered dirty, they are generally pretty clean animals in their natural environment. The environment from which they come, is the reason for their bad reputation, as many of these cockroaches found in households come through sewer systems and other less favourable inlets. This is where the cockroach picks up germs, bacteria and fecal matter. This sticks to them and is also ingested and then later dedicate, which leads to poor hygiene and the spread of health conditions and diseases. Cockroaches are extremely tough, versatile creatures and can get through almost any gap. Their robust bodies and their drive to survive and breed, makes them a formidable foe. Recent studies have shown that they have also evolved and become immune to certain poisons sold in the market place to try and eradicate them. Taking this all into account, it is best to use a professional to guarantee the successful removal of a cockroach infestation. Particularly for commercial ventures like restaurants, hotels, lodges, B&B’s etc., where your business’ reputation may be on the line. 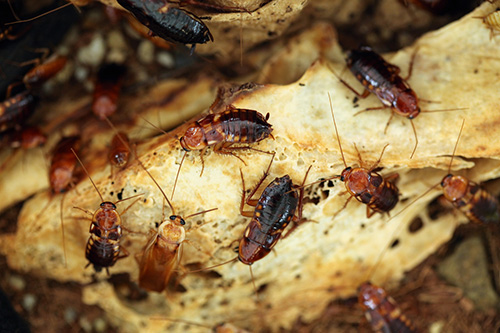 Cockroaches are insects of the order Blattodea, which also includes termites. About 30 cockroach species out of 4,600 are associated with human habitats. About four species are well known as pests.

The cockroaches are an ancient group, dating back at least as far as the Carboniferous period, some 320 million years ago. Those early ancestors however lacked the internal ovipositors of modern roaches. Cockroaches are somewhat generalized insects without special adaptations like the sucking mouthparts of aphids and other true bugs; they have chewing mouthparts and are likely among the most primitive of living neopteran insects. They are common and hardy insects, and can tolerate a wide range of environments from Arctic cold to tropical heat. Tropical cockroaches are often much bigger than temperate species, and, contrary to popular belief, extinct cockroach relatives and ‘roachoids’ such as the Carboniferous Archimylacris and the Permian Apthoroblattina were not as large as the biggest modern species.

Some species, such as the gregarious German cockroach, have an elaborate social structure involving common shelter, social dependence, information transfer and kin recognition. Cockroaches have appeared in human culture since classical antiquity. They are popularly depicted as dirty pests, though the great majority of species are inoffensive and live in a wide range of habitats around the world.