As with all animals on our planet, ants and termites have an important role to play. Certain insect species, such as ants and termites, may pose problems in householders as the essential survival components are freely available – Namely food, water and shelter.

Ants often pose problems when it comes to food. When in smaller groups these insects are manageable, but when in larger colonies, they can be considered a pest to human beings. Particularly with the consumption of food or damage to property.

Termites are often called the ‘white ants’, but this is not entirely accurate. Ants are considered carnivorous and termites herbivorous. In fact, ants and termites are arch enemies in the world of insects and ants often kill and eat termites. Although termites may be herbivorous, they can cause damage to wooden beams used for structural support or other wooden furnishings. 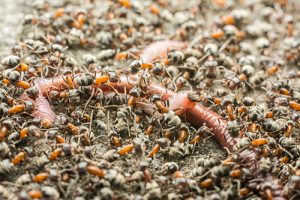 Ants: are eusocial insects of the family Formicidae and, along with the related wasps and bees, belong to the order Hymenoptera. Ants evolved from wasp-like ancestors in the Cretaceous period, about 99 million years ago, and diversified after the rise of flowering plants. More than 12,500 of an estimated total of 22,000 species have been classified. They are easily identified by their elbowed antennae and the distinctive node-like structure that forms their slender waists.

Ants form colonies that range in size from a few dozen predatory individuals living in small natural cavities to highly organised colonies that may occupy large territories and consist of millions of individuals. Larger colonies consist mostly of sterile, wingless females forming castes of “workers”, “soldiers”, or other specialised groups. Nearly all ant colonies also have some fertile males called “drones” and one or more fertile females called “queens”. The colonies are described as superorganisms because the ants appear to operate as a unified entity, collectively working together to support the colony.

Ants have colonised almost every landmass on Earth. The only places lacking indigenous ants are Antarctica and a few remote or inhospitable islands. Ants thrive in most ecosystems and may form 15–25% of the terrestrial animal biomass. Their success in so many environments has been attributed to their social organisation and their ability to modify habitats, tap resources, and defend themselves. Their long co-evolution with other species has led to mimetic, commensal, parasitic, and mutualistic relationships.

Ant societies have division of labour, communication between individuals, and an ability to solve complex problems. These parallels with human societies have long been an inspiration and subject of study. Many human cultures make use of ants in cuisine, medication, and rituals. Some species are valued in their role as biological pest control agents. Their ability to exploit resources may bring ants into conflict with humans, however, as they can damage crops and invade buildings. Some species, such as the red imported fire ant (Solenopsis invicta), are regarded as invasive species, establishing themselves in areas where they have been introduced accidentally.

Termites (*Sometimes Called White Ants): Are eusocial insects that are classified at the taxonomic rank of infraorder Isoptera, or as epifamily Termitoidae within the cockroach order Blattodea. Termites were once classified in a separate order from cockroaches, but recent phylogenetic studies indicate that they evolved from close ancestors of cockroaches during the Jurassic or Triassic. However, the first termites possibly emerged during the Permian or even the Carboniferous. About 3,106 species are currently described, with a few hundred more left to be described. Although these insects are often called “white ants”, they are not ants.

Like ants and some bees and wasps from the separate order Hymenoptera, termites divide labour among castes consisting of sterile male and female “workers” and “soldiers”. All colonies have fertile males called “kings” and one or more fertile females called “queens”. Termites mostly feed on dead plant material and cellulose, generally in the form of wood, leaf litter, soil, or animal dung. Termites are major detritivores, particularly in the subtropical and tropical regions, and their recycling of wood and plant matter is of considerable ecological importance.

Termites are among the most successful groups of insects on Earth, colonising most landmasses except for Antarctica. Their colonies range in size from a few hundred individuals to enormous societies with several million individuals. Termite queens have the longest lifespan of any insect in the world, with some queens reportedly living up to 30 to 50 years. Unlike ants, which undergo a complete metamorphosis, each individual termite goes through an incomplete metamorphosis that proceeds through egg, nymph, and adult stages. Colonies are described as superorganisms because the termites form part of a self-regulating entity: the colony itself.

Termites are a delicacy in the diet of some human cultures and are used in many traditional medicines. Several hundred species are economically significant as pests that can cause serious damage to buildings, crops, or plantation forests. Some species, such as the West Indian drywood termite (Cryptotermes brevis), are regarded as invasive species.