Rodents such as mice, rats and squirrels have been know to decimate food stocks, particularly in agricultural environments where animal feed is present. They are also renowned for causing huge damage to property ranging from clothing, paper work and even building structures. Diseases are also a concern, which can be found in rodent species such as rats.

Off-the-shelf poisons contain chemicals that have been on the market for decades and recent studies in the UK have shown that rats, like cockroaches, are starting to build-up a resistance to certain chemical compounds. These newly evolved rats have now been called ‘Super Rats’ – There is a growing concern as to how, we as a society, are going to be able to manage rodent populations in the future. To find a balance that benefits humans and the environment as a whole. There is a big debate on the use of many of these off-the-shelf poisons (along with certain commercial products), as they have a serious knock-on effect to the surrounding environment. For example, if a rat consumes a lethal poison, then gets eaten by an owl, the high chemical content then kills the owl and so it often goes down the food chain. There are various methods and more environmentally friendly products that can be used to help dramatically reduce or eliminate toxins being spread throughout our natural environment. 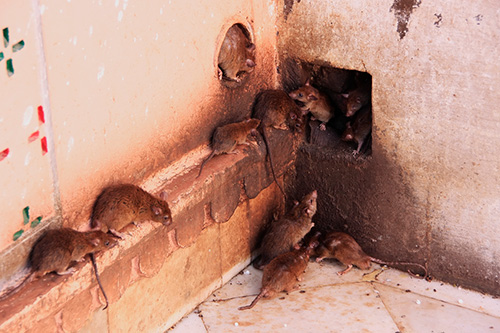 Rodents (from Latin rodere, “to gnaw”): Are mammals of the order Rodentia, which are characterized by a single pair of continuously growing incisors in each of the upper and lower jaws. About 40% of all mammal species are rodents; they are found in vast numbers on all continents except Antarctica. They are the most diversified mammalian order and live in a variety of terrestrial habitats, including human-made environments.

Species can be arboreal, fossorial (burrowing), or semiaquatic. Well-known rodents include mice, rats, squirrels, prairie dogs, porcupines, beavers, guinea pigs, hamsters, gerbils and capybaras. Other animals such as rabbits, hares, and pikas, whose incisors also grow continually, were once included with them, but are now considered to be in a separate order, the Lagomorpha. Nonetheless, Rodentia and Lagomorpha are sister groups, sharing a most recent common ancestor and forming the clade of Glires.

Most rodents are small animals with robust bodies, short limbs, and long tails. They use their sharp incisors to gnaw food, excavate burrows, and defend themselves. Most eat seeds or other plant material, but some have more varied diets. They tend to be social animals and many species live in societies with complex ways of communicating with each other. Mating among rodents can vary from monogamy, to polygyny, to promiscuity. Many have litters of underdeveloped, altricial young, while others are precocial (relatively well developed) at birth.

The rodent fossil record dates back to the Paleocene on the supercontinent of Laurasia. Rodents greatly diversified in the Eocene, as they spread across continents, sometimes even crossing oceans. Rodents reached both South America and Madagascar from Africa, and were the only terrestrial placental mammals to reach and colonize Australia.

Rodents have been used as food, for clothing, as pets, and as laboratory animals in research. Some species, in particular the brown rat, the black rat, and the house mouse, are serious pests, eating and spoiling food stored by humans, and spreading diseases. Accidentally introduced species of rodents are often considered to be invasive, and have caused the extinction of numerous species, such as island birds, previously isolated from land-based predators.

Rats: Are various medium-sized, long-tailed rodents of the superfamily Muroidea.

“True rats” are members of the genus Rattus, the most important of which to humans are the black rat, Rattus rattus, and the brown rat, Rattus norvegicus. Many members of other rodent genera and families are also referred to as rats, and share many characteristics with true rats.

Rats are typically distinguished from mice by their size. Generally, when someone discovers a large muroid rodent, its common name includes the term rat, while if it is smaller, the name includes the term mouse. The muroid family is broad and complex, and the common terms rat and mouse are not taxonomically specific. Scientifically, the terms are not confined to members of the Rattus and Mus genera, for example, the pack rat and cotton mouse.