Durban, do you need help with waterproofing & damp proofing?

Faults within your waterproofing and damp proofing structures can lead to leakages and seepages. In time, this can cause extensive damage to building structures, in various areas, from roofing, concrete slabbing, walls and running down to your foundations. Rising damp comes from the bottom up and will also have a major impact on your building’s structural components. In addition to property damage, the flow or rising of water (or damp) can cause serious health risks when mold and bacteria finds its way into your home or work environment. Durban’s warm and humid climate can also act as a catalyst promoting moldy, bacterial environments where excess moisture may be present.

We can assist you with various waterproofing and damp proofing solutions.

We can assist you with the sourcing of materials that are required for both waterproofing and damp proofing applications.

Depending on your environment, infrastructure and technical specifications, waterproofing and/or damp proofing can be a challenging task. If not done correctly, water damage or rising damp can become a common occurrence, increasing your risk of infrastructure degradation and/or potential health risks.

We can help you assess your environment and implement waterproofing or damp proofing solutions that will dramatically minimise or completely mitigate all potential risks.

Owing to the harsh environments waterproofing and damp proofing materials need to endure, in time, there will be areas that will need to be inspected and attended to. A proactive approach through periodic maintenance and repair practices will help to minimise the chances of any major epidemics. 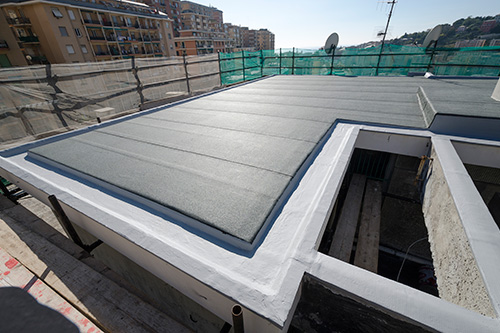 Waterproofing: Is the process of making an object or structure waterproof or water-resistant, so that it remains relatively unaffected by water or resisting the ingress of water under specified conditions. Such items may be used in wet environments or under water to specified depths.

Water resistant and waterproof often refer to penetration of water in its liquid state and possibly under pressure, whereas damp proof refers to resistance to humidity or dampness. Permeation of water vapor through a material or structure is reported as a moisture vapor transmission rate.

Waterproofing is used in reference to building structures (such as basements, decks, or wet areas), watercraft, canvas, clothing (raincoats or waders), electronic devices and paper packaging (such as cartons for liquids).

Damp Proofing: In construction is a type of moisture control applied to building walls and floors to prevent moisture from passing into the interior spaces. Damp problems are among the most frequent problems encountered in homes.

Damp proofing is defined by the American Society for Testing and Materials (ASTM) as a material that resists the passage of water with no hydro-static pressure and waterproof as a treatment that resists the passage of water under pressure. Generally damp proofing keeps moisture out of a building where vapor barriers keep interior moisture from getting into walls. Moisture resistance is not necessarily absolute: it is usually defined by a specific test method, limits, and engineering tolerances.

A damp-proof course (DPC) is a barrier through the structure designed to prevent moisture rising by capillary action such as through a phenomenon known as rising damp. Rising damp is the effect of water rising from the ground into property. The damp proof course may be horizontal or vertical. A DPC layer is usually laid below all masonry walls, regardless if the wall is a load bearing wall or a partition wall.

A damp-proof membrane (DPM) is a membrane material applied to prevent moisture transmission. A common example is polyethylene sheeting laid under a concrete slab to prevent the concrete from gaining moisture through capillary action. A DPM may be used for the DPC.

Surface coating with thin water proof materials for resistance to non-pressurized moisture such as rain water or a coating of cement sprayed on such as shotcrete which can resist water under pressure.

Health Effects of Mold: Molds are ubiquitous, and mold spores are a common component of household and workplace dust; however, when mold spores are present in large quantities, they can present a health hazard to humans, potentially causing allergic reactions and respiratory problems.

Some molds also produce mycotoxins that can pose serious health risks to humans and animals. Some studies claim that exposure to high levels of mycotoxins can lead to neurological problems and in some cases, death. Prolonged exposure, e.g. daily home exposure, may be particularly harmful. Research on the health impacts of mold has not been conclusive. The term “toxic mold” refers to molds that produce mycotoxins, such as Stachybotrys chartarum, and not to all molds in general.

Molds can also pose a hazard to human and animal health when they are consumed following the growth of certain mold species in stored food. Some species produce toxic secondary metabolites, collectively termed mycotoxins including aflatoxins, ochratoxins, fumonisins, trichothecenes, citrinin, and patulin. These toxic properties may be used for the benefit of humans when the toxicity is directed against other organisms; for example, penicillin adversely affects the growth of Gram-positive bacteria (e.g. Clostridium species), certain spirochetes and certain fungi